If you’ve been there, you know what I’m talking about. It has pretty much everything for someone who craves sight seeing or wants to immerse in nature or someone who just wants to enjoy city life and all the modern amenities that a modern city should offer. Snowy mountains, thermal springs, spectacular beaches, sun kissed cities, amazing architecture, rich in history and culture, you name it and you’re bound to find something of your liking in Turkey.

I had the privilege of visiting this beautiful country back in 2013 for a study trip along with my classmates and teachers. The trip was fantastic to say the least! The people are so friendly and I learned during the trip that they love Pakistanis as Pakistan supported Turkey during some very troubled times. I met quite a few Turkish people who showed immense respect and love for my country for which I’ll always be grateful.

Our itinerary included 3 cities: Istanbul, Bolu and Cappadocia. I’ll feature Bolu and Cappadocia in the upcoming posts as part of Travelogue Thursday! In this post, I’m featuring places to see and things to do in Istanbul. There’s loads to see so I’ve split this post into two parts! If you haven’t visited Istanbul yet, come see the city where East meets West through my eyes and discover why this is one of the most visited cities in the world!

A natural, narrow strait, Bosphorus separates European Turkey from Asian Turkey (Yes, Turkey is the only country spanning on two continents!) and is also a significant waterway situated in northwestern Turkey. Not to mention, the views from the Bosphorus are stunning. I promise you’ll love it if you take a ferry ride cruising on the Bosphorus like I did!

The cruise at the  Bosphorus was an amazing experience and the view was so picturesque, totally Instagram worthy! This photograph was taken by my classmate Laraib Muneer and it’s one of my favourites from the trip ^_^.

Located in the heart of Istanbul, Hagia Sophia (pronounced as Aya Sofia) has great significance for both Byzantine and Ottoman Empires. Built as a church, later converted into a mosque, it now stands as a museum and is one of the most popular sites of Turkey. An architectural wonder as diverse as Turkey itself, a trip to Istanbul would be incomplete without giving Hagia Sophia a visit. I personally was in awe of how Hagia Sophia has become a melting pot of different cultures and people of so many different faiths come together to marvel at the beauty of it.

Standing magnificently right next to Hagia Sofia and still serving its intended purpose is Sultan Ahmed Mosque. Created by Sultan Ahmed I to reaffirm the power of the Ottoman Empire, it is popularly known as the Blue Mosque due to its gorgeous interior consisting of intricately hand painted blue tiles. 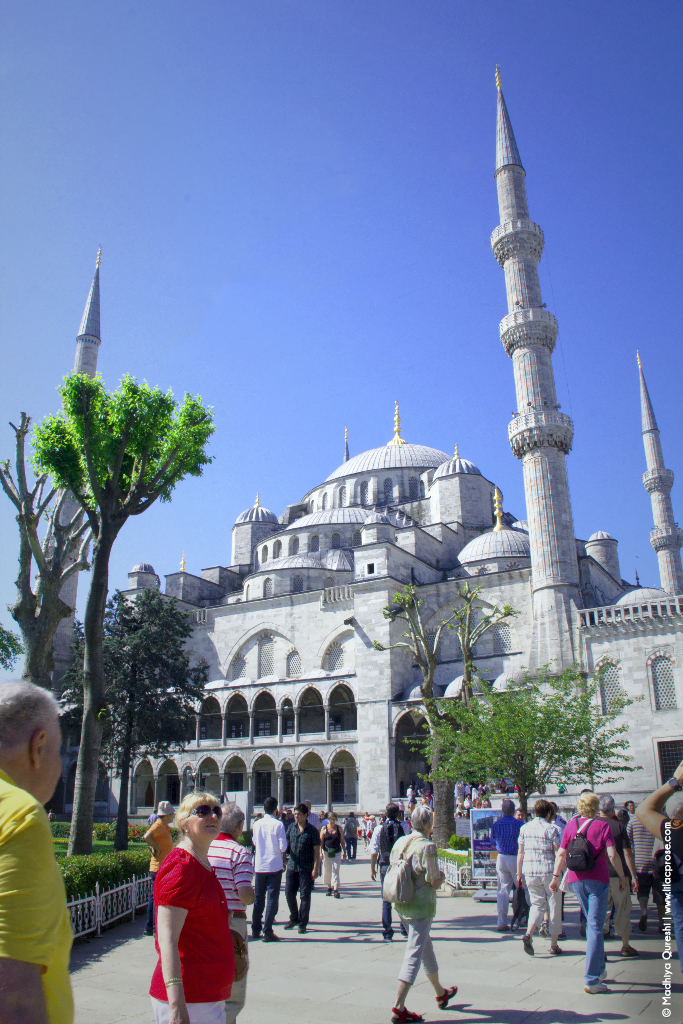 On the inside, Blue Mosque is like an oasis in the middle of the hustle and bustle of the city. We had the privilege to pray in there and it was absolutely breathtaking and so serene!

We met a super friendly local there also who was living in Germany (Germany has the second largest population of Turkish people other than Turkey!) but was there for a visit. She graciously invited us to visit her if we ever go to Germany. If you’re reading this: Hi! ^_^

Serving as the main residence and administrative headquarters of the Ottoman Sultans in the 15th century, today Topkapi Palace is a museum housing thousands of visitors every year who take a glimpse in awe at the way Sultans used to reside in this magnificent palace. One of Istanbul’s UNESCO World Heritage Sites, Topkapi Palace is a site not to be missed. 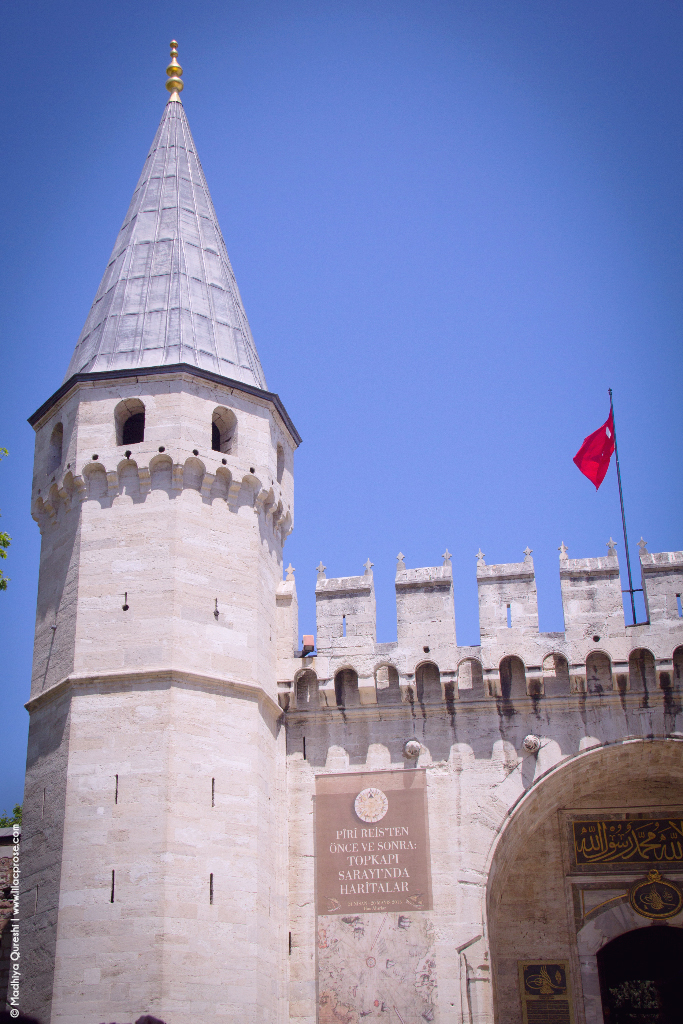 Only when you visit Topkapi Palace is when you really get an idea of how Ottoman Sultans used to live. From the grand architecture to a crib made out of gold, Islamic artifacts to stunning tapestries, there’s so much to see inside. I wish I could show photos but photography was not allowed inside the museum. There were these two people dressed up as Palace Guards outside thought which is something I can show you! ^_^ 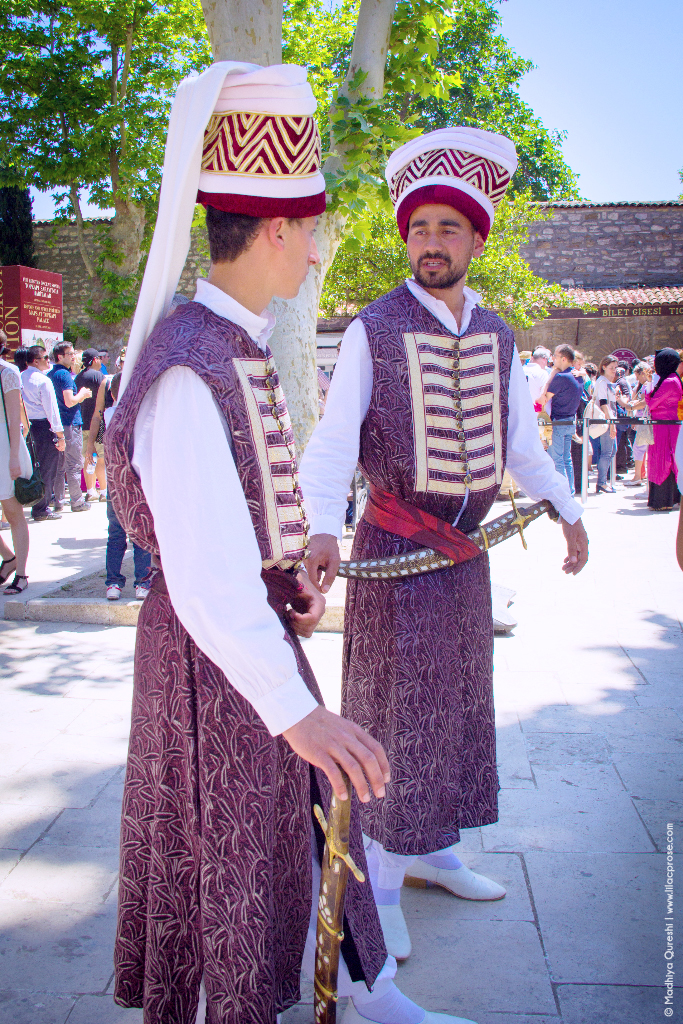 Lying beneath the city of Istanbul is Basilica Cistern, the largest ancient Cistern of the city which not only stored water but also supplied it to its inhabitants in the past. Famous for its upside down Medusa heads, it looks and feels more like a sacred temple than a Cistern.

It’s a bit spooky inside, I gotta admit 🙈… 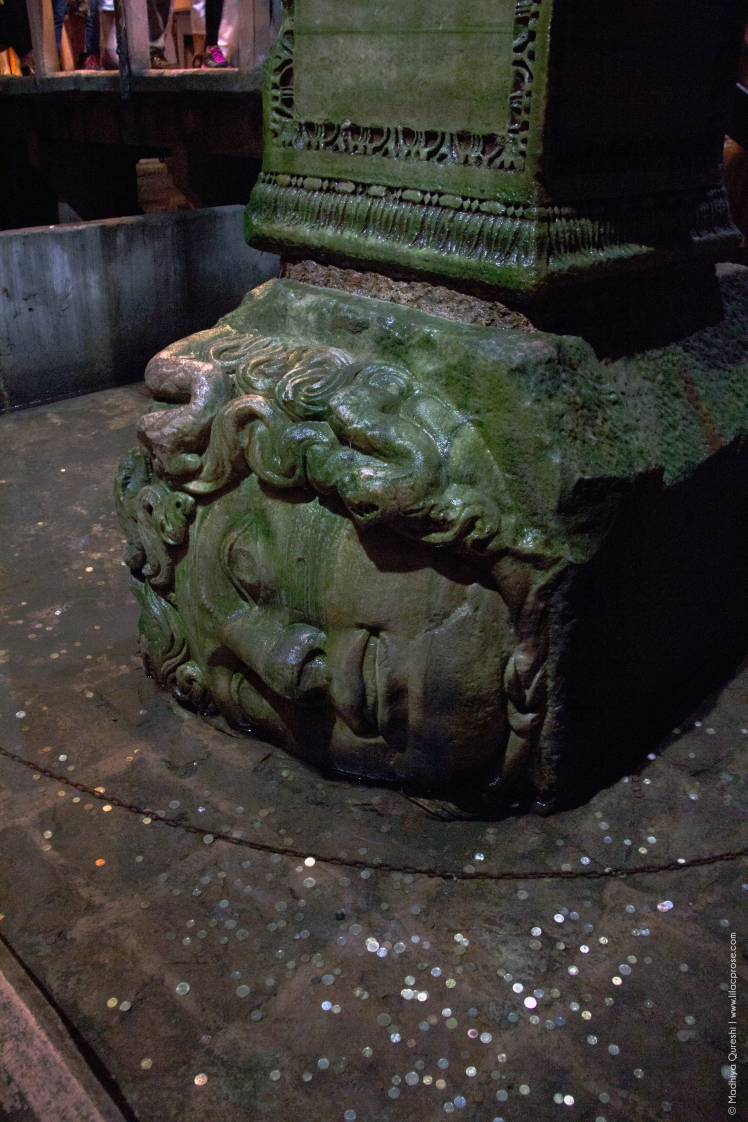 But definitely worth seeing!

So that’s all for part I of Istanbul Guide, there’s a lot more to come in part II! Follow me to get future updates! If you have any comments or suggestions, feel free to comment below with a link to your blog, I’d love to check it out! Happy Travels! ^_^

20 thoughts on “A Guide to Istanbul Part I”